62. On a wing and a prayer – Flashback, tracks from the past

Epic space battle warfare and music is what this hour is all about! More specifically: Wing Commander 1 and tracked music with ONLY epic symphonies. Nothing sounds thin today as we dig into the first installment of the Wing Commander series and try to see if the game stands up to today’s standards. So sit down in your chair, pour something to drink and get ready to deal with a race of evil cats that want you out of the Enyo-sector.

00:00 Origin – Intro
00:06 ericade.radio – Time for another episode of Flashback – Tracks from the past
00:16 DJ Daemon: “In a distant future, mankind is locked in a deadly war…” with cats. Yeah, I know, it’s been like that since we took them into our homes, but in “Wing commander 1”, it’s not about domestic house cats, rather and bunch of unkempt hairballs with murderous tendencies. No, I don’t really see the difference either. “Wing commander 1” is a legendary space flight simulator that immersed you into a world of space battle, military tactics and racial stereotypes that may not have aged perfectly.

00:54 Eiyofuryo – Lamia
04:49 DJ Daemon: I got Wing commander for my Amiga 500 half a year after it was released, and it was already in the bargain bin. But what a bargain! I played through it and enjoyed the inspired storytelling and the cinematic scenes that take you, a green space pilot, through battle against those big cats. You are part of a team of pilots that accompany you in the fights. I will talk about the different aspects of the game and exactly were it shone and where it did not. Suffice to say, it was a success and spawned a number of sequels. None of them for the Amiga.

05:36 Acumen – One of a kind
09:54 DJ Daemon: First, the storytelling The game starts with you losing a space battle. “Game over, man”. But, it’s just an arcade machine this time. Phew! You are Christoffer Blair, if you choose to keep that name, a brand-new recruit on the Tigersclaw. The claw is a big human built battleship that just entered the Enyo-system. This part of the galaxy is cat territory, so you’re going to see some serious action soon. You immediately get to know the space pilots Paladin and Angel that you will later have as your wingmen. Ok, the game starts in a pub, but they’re not THAT kinda wingmen. You soon sit in you first space fighter and meet with the Drahlti fighters. The cat people, or Kilrathi, don’t seem to take you as serious threat as those ships are easy to defeat. But it gets worse.

11:10 Austin Smith – Forever Revealing
14:04 DJ Daemon: At this time we must delve into your wingmen and women. They’re at best characters to like, but at worse pretty dated racial or typical trope stereotypes. Paladin is so Scottish; you might wonder if Star Trek didn’t teach them a warning as to not make characters comedy relief. Maniac is a total …. tactless… buffoon. Unsure where he comes from. Angel is Belgian, but really is super French so you wonder if she drinks red wine and eats baguettes will hunting the baddies. But weirdly enough, I got kinda attached to them. They can die during battle, and that loss is permanent. So, I found myself often replaying missions where they died, in order not to lose them.

15:10 BadliZ – Beastmaster’s tale
20:45 DJ Daemon: The game play – you know the meat of the whole game – is fun. It plays a bit like Elite but is polished and has a number of fast paced tactical features. You see the cockpit from a first-person perspective with your legs, the control column, the panels and you also see out the front window. The game shows the enemies as bitmapped objects, that look good far away, but pretty pixelated when up close. You chase after them, trying to flank them or attack them where they’re weak. All Kilrathi ships have vulnerable points. You also have to sustain attacks from them, so managing your shields is necessary. The game is sluggish on an Amiga 500 but runs smoothly on a decent Amiga 1200.

21:47 Llageran – Flying Through Time
25:19 DJ Daemon: Music and SFX are often overlooked in games, but Wing Commander 1 has put a lot of effort into it. When you start, the music is calm, but when hell breaks loose, the music follows suit and ramps up the tempo. The scenes when you rush to your ship in the hangar has a very adrenalin-rushing tempo and when you win, the music is upbeat and epic in a true cinematic way.

26:54 Elysis – Classe
29:16 DJ Daemon: The graphics and animations are exceptionally well done. While not the best there ever were, they create an atmosphere of beaty and danger. And all aspects of the game are animated, even your death. The facial animations are the least impressive part of it. And my favorite part is how the ship looks after battle. If you took little damage, it looks fine, but get progressively more beat-up as the cats score hits on it. The ship is repaired back to its full beauty before every new battle. The save game system is a room with bunks, and the sleeping pilots are the save game slots. This is where you meet and talk missions past and the current state of the battle with your wingmen and “Shotglass”, the retired pilot and current bartender.

30:17 BadliZ – War Cries
35:59 DJ Daemon: The storytelling has a way to keep you motivated. You see, it will let you lose some of the missions and still proceed. But a number of times, you get a cut-scene telling stories from other part of the star system. If you won all the missions since the last cutscene or the beginning of the game, the stories are happy. The scientists were unarmed but could beat the Kilrathi-attackers with their cunning or in another scene, the military base had hidden anti-air defenses that destroyed the attackers. If you lose missions, the cutscenes always end in a bad way. The finest scientific minds of the system are lost, and the base is destroyed. This makes no important difference in the game but is a motivator to keep winning or replaying the missions until you do. It did work for me at least.

37:03 Blue Max – Eden 8
40:59 DJ Daemon: “Wing Commander 1” stands out as one of the finest games ever for the Amiga. It was off course available for your PC as well and probably other platforms. A remastered version was created for the CD32 and after the Amiga era ended, the series continued the PC. One of the later episodes feature Mark Hamill, you know “Luke Skywalker” from “Star Wars”, in a role. But by then, I kinda though the games had become stale and uninteresting. “Wing commander 1” for the Amiga 500, comes on four diskettes if I remember correctly. Still it has so much graphics and sound and nice stories to tell. For me, it’s a true epic story fit for inclusion in annals of gaming history… And… Oh, stop laughing, what are you, five? Ehhmmm… Anyway, I wish to say: it’s a great game … A great retro game. 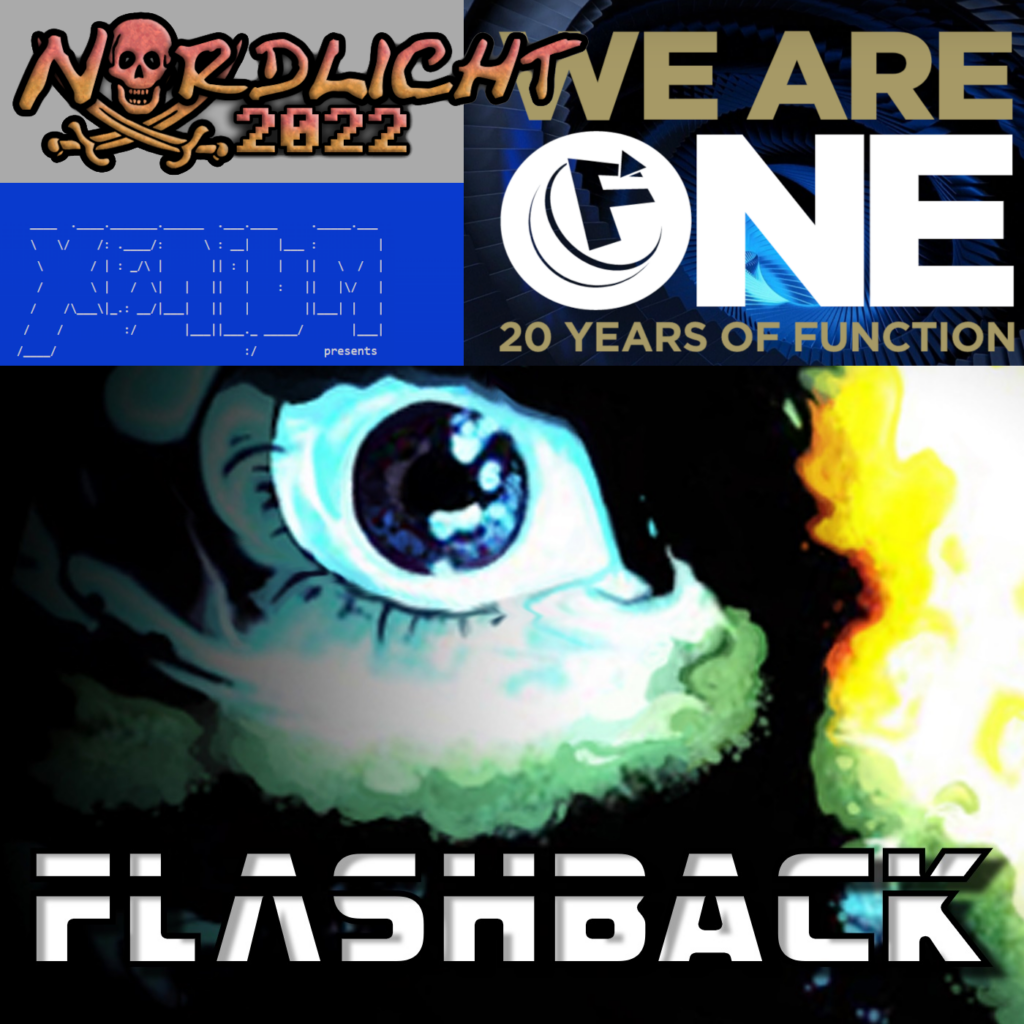 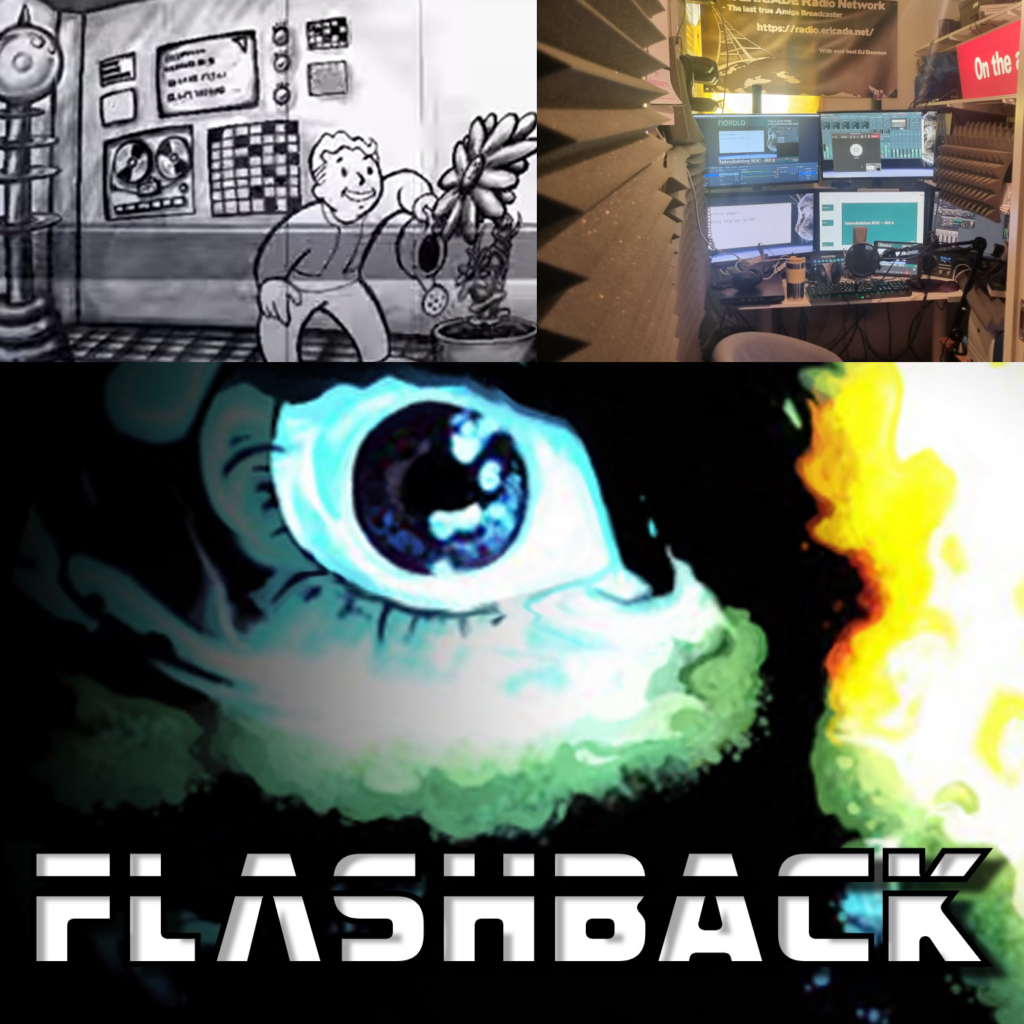 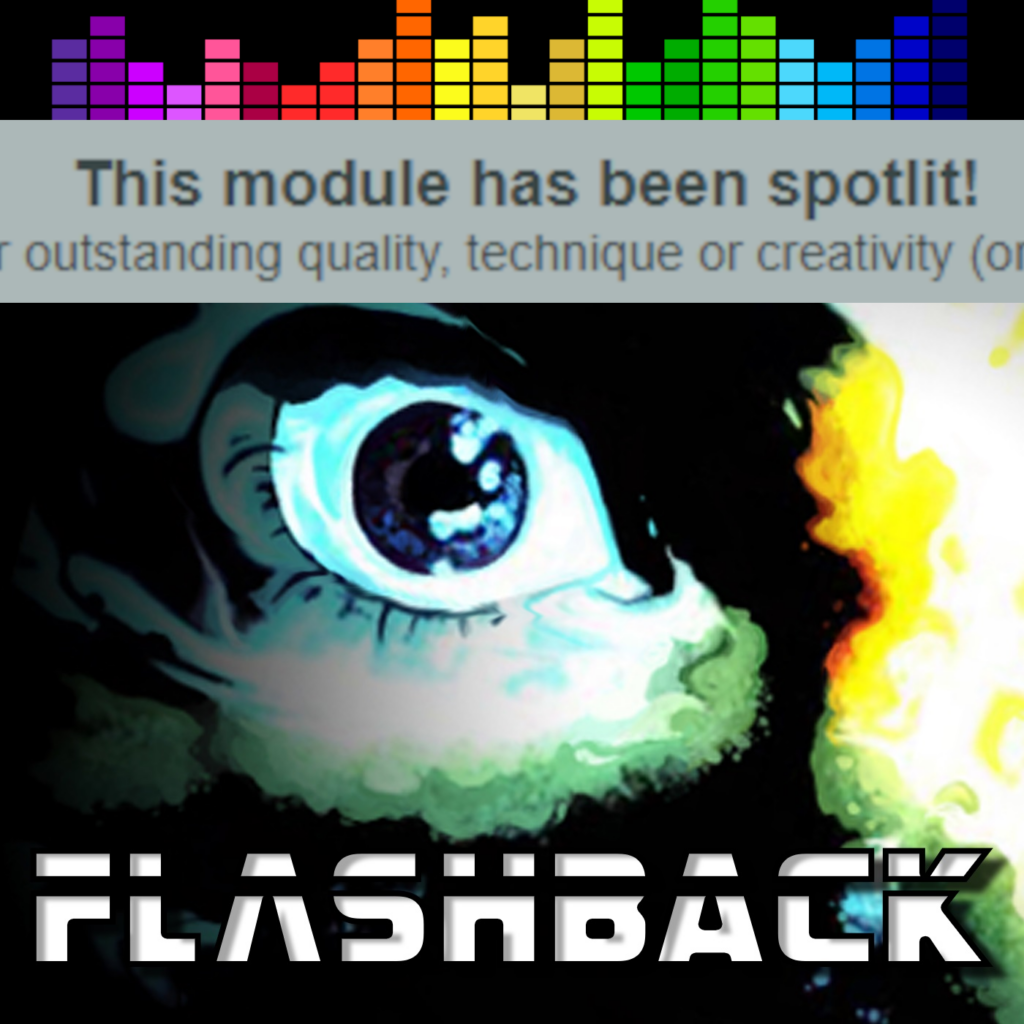 63. The November grave yard shift – Flashback, tracks from the past 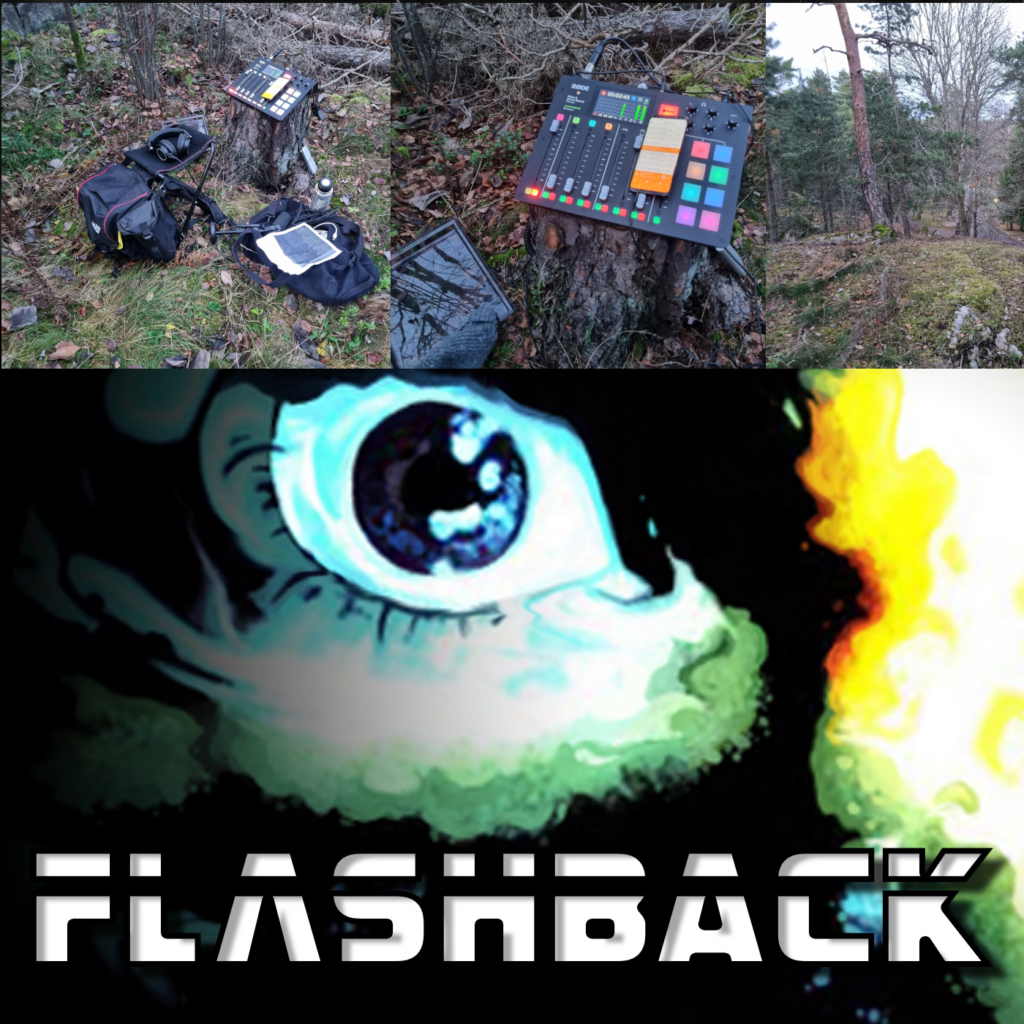 61. A top list of our own – Flashback, tracks from the past 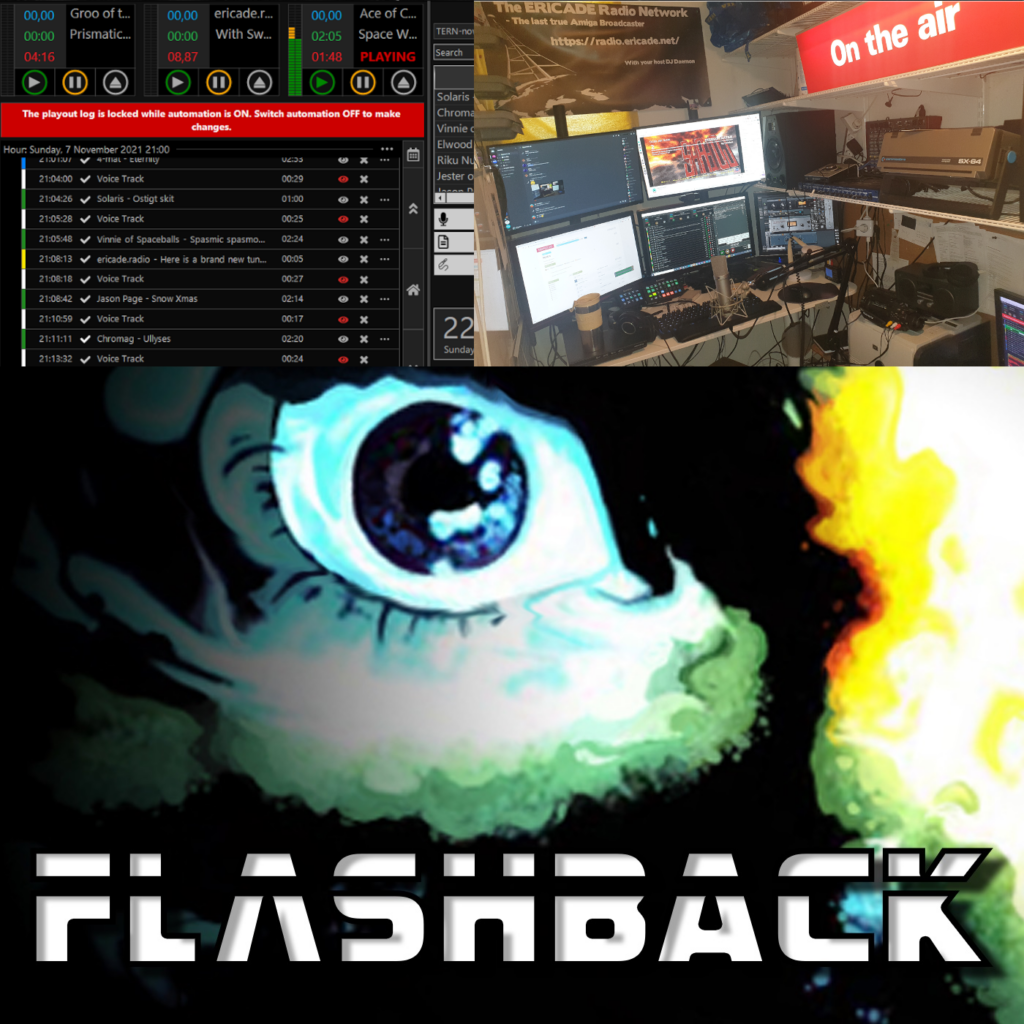